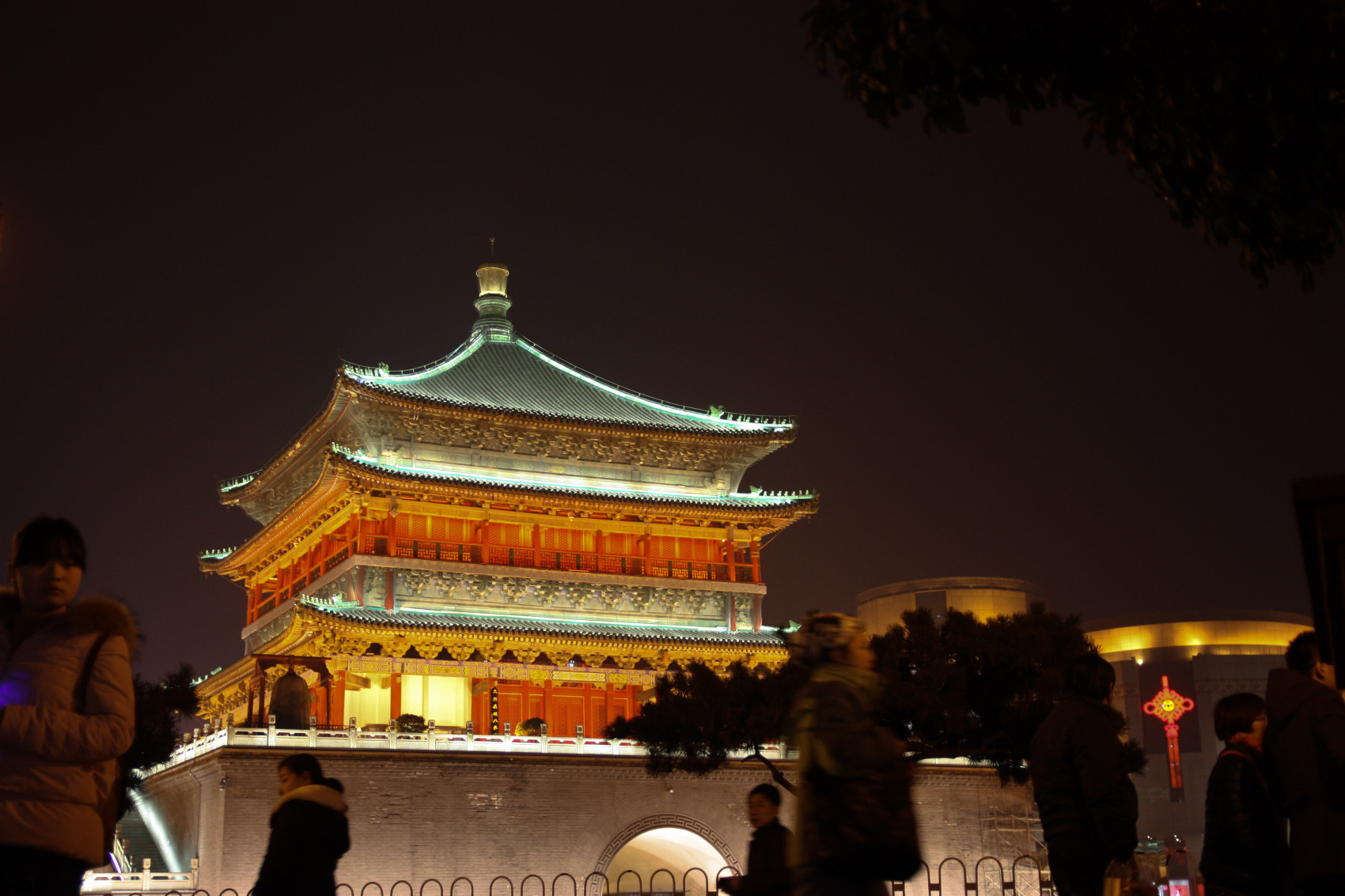 First posted on TVG in China, 2016. I’m currently archiving old posts onto one blog.
It may be touristy as it gets, but I’m a fan of Xi’an. It’s famous for it’s ancient city walls which aren’t actually that ancient anymore (big chunks were rebuilt in the early part of the 20th century), and the infamous terracotta warriors.

and also the centre piece of the city, the Drum and Bell towers.
The city could also be considered where China begins to turn into western China, where the country begins to have stronger Muslim influences. For me, the city’s Muslim district is the best part of Xi’an.
Xi’an is one of the former capitals of China and perhaps this is why despite being very much a modern Chinese city, there are still remnants of an ancient past. The problem with a lot of China is that ‘ancient’ is really rebuilt or replica, yet Xi’an does have the occasional genuine feeling temple and such. The wall, rebuilt or not, also gives a sense of grandeur which the non-walled cities of China lack. 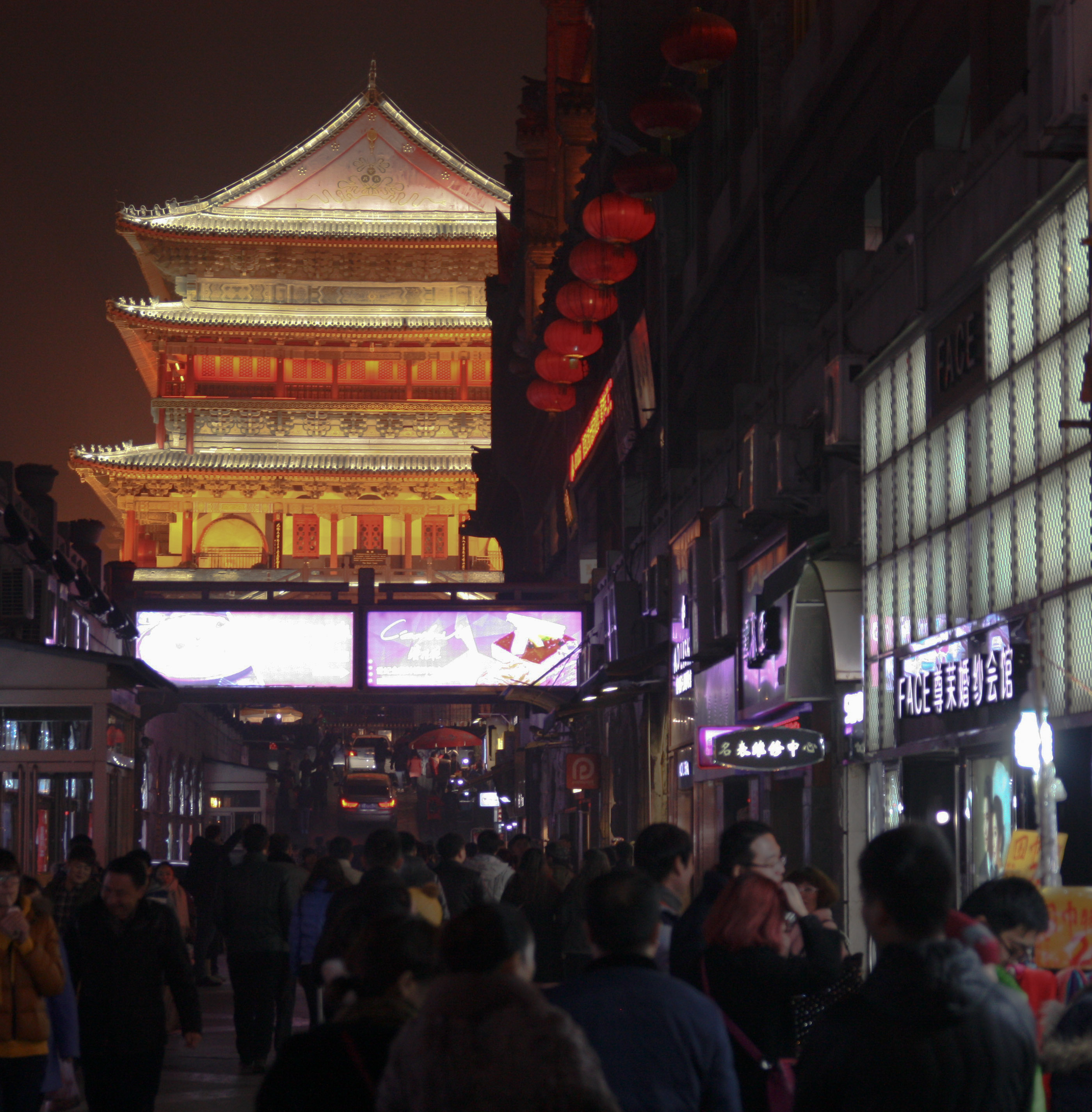 I’m a big fan of the contrast between ‘old’ and new. Nothing shouts China more than sweeping rooftops and consumerism.
The walls encircle the centre of the city, running for over 8 miles. 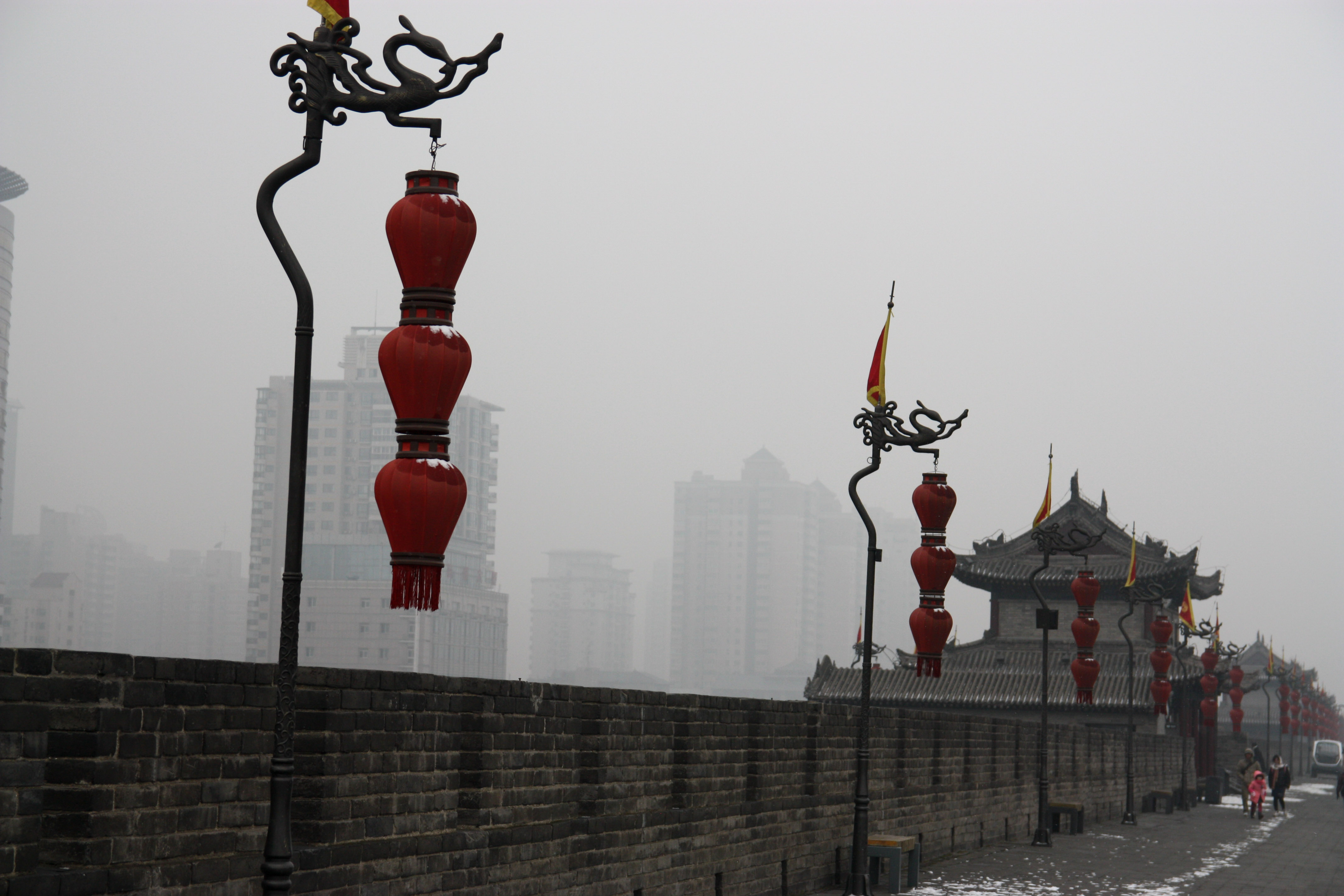 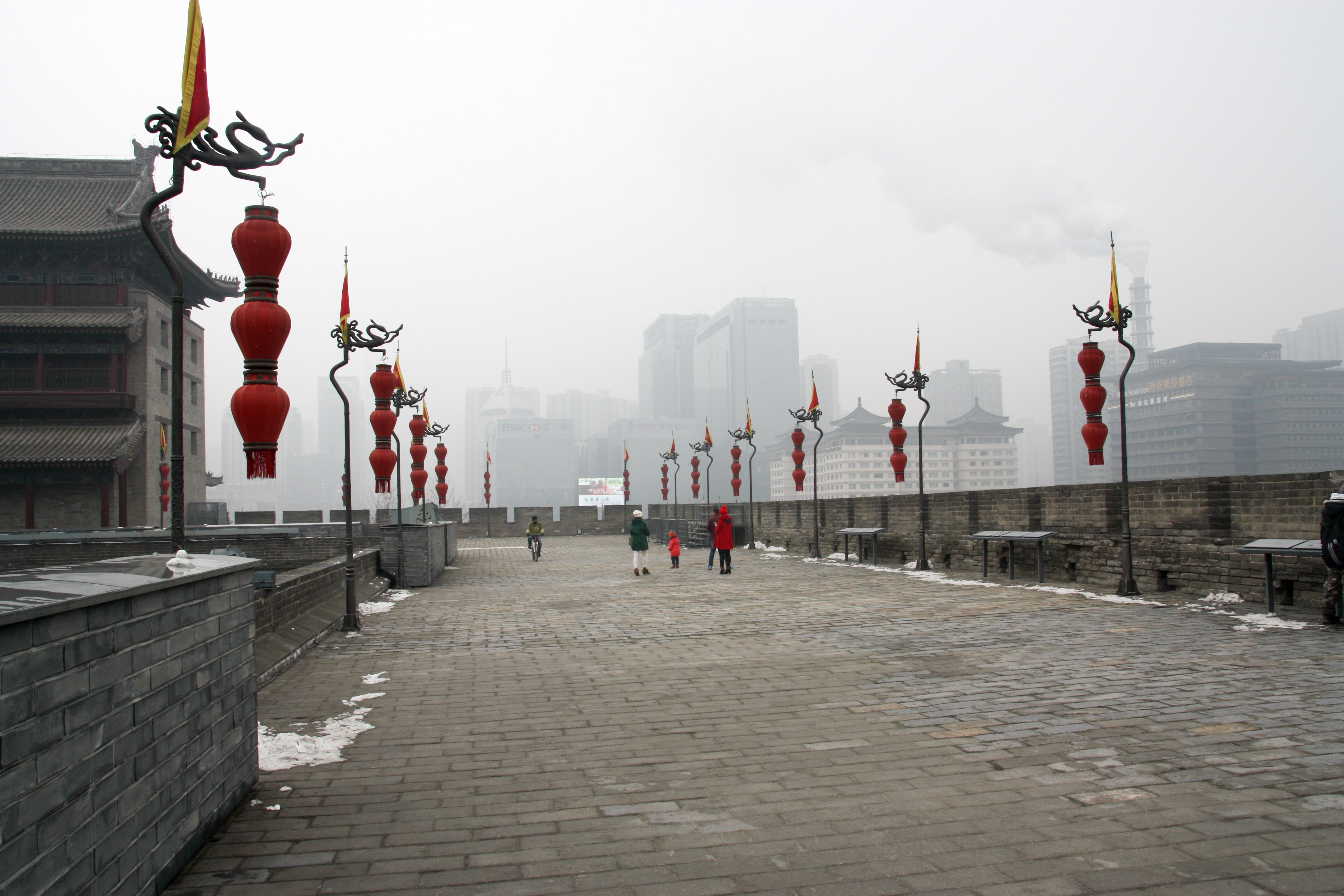 Someone up on the wall had made use of the tiny amount of snow that lay dotted about it, and had made a few mini-snowmen. In true Chinese style, one of them even had a cigarette..

The chain shows clear dedication to snowman making.
For me, as I said earlier, not the wall but rather the Muslim district is what makes Xi’an. Yes, it’s touristy and extremely busy, but with smells and smoke wafting madly through the air, and enough bustle to rival the liveliest of the world’s cities, This part of town really hits the senses.

The main street in the Muslim district is essentially a food market, especially at night – with a special bias towards all things sweet.

These guys were hammering out some sugary looking mix that eventually ended up looking a bit like nougat.

The west of China is known for pulled noodles, but apparently also pulled sweet confectionery. 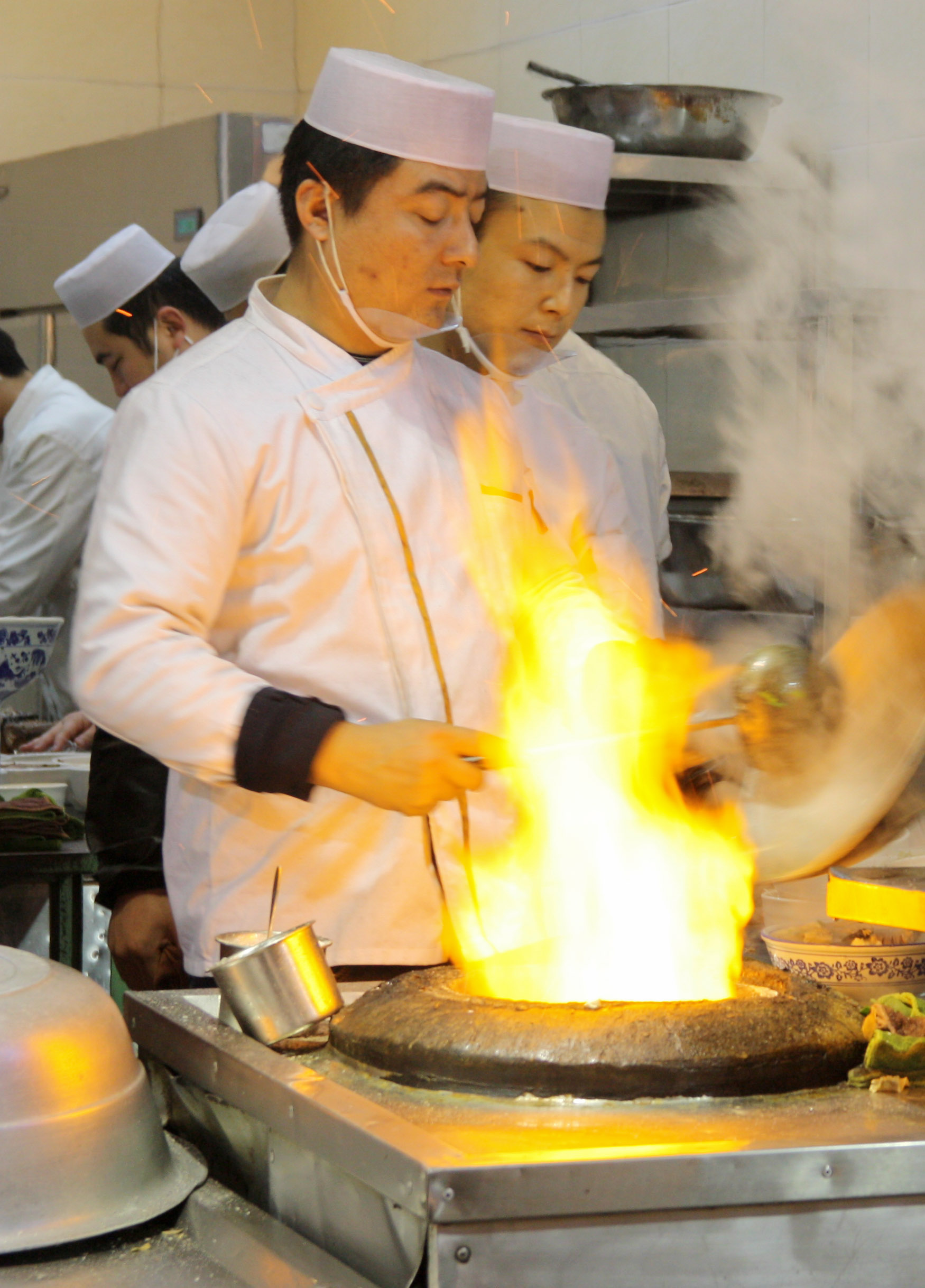 Many of the restaurants on the street have their kitchens open to the street, so as you walk down, seeing flames at the edge of your eyes from the extremely high-powered hobs is a normal sight.
I wouldn’t want to cook on what basically looks like an open furnace…

Amongst the hanging flags and neon signs, you might just come across a pretty terrifying looking character. It’s actually the name of a kind of local noodle: Biang Biang Mian.

It is, depending on your view, the most complicated character in the Chinese language. The other view is that it’s technically not a Chinese character, because the sound ‘biang’ is a dialect word, and not in standard Chinese.
Also the further west you go, the more likely you are to see middle-of-the street butchery work going on. It’s pretty common place in the Muslim district to see this kind of thing.

And in the end, it’ll probably get cooked like this, out on the Chinese style barbeque.

The area round Xi’an can look pretty bleak in the winter; a fact that was very clear after leaving the city and hopping on the train to the next city. 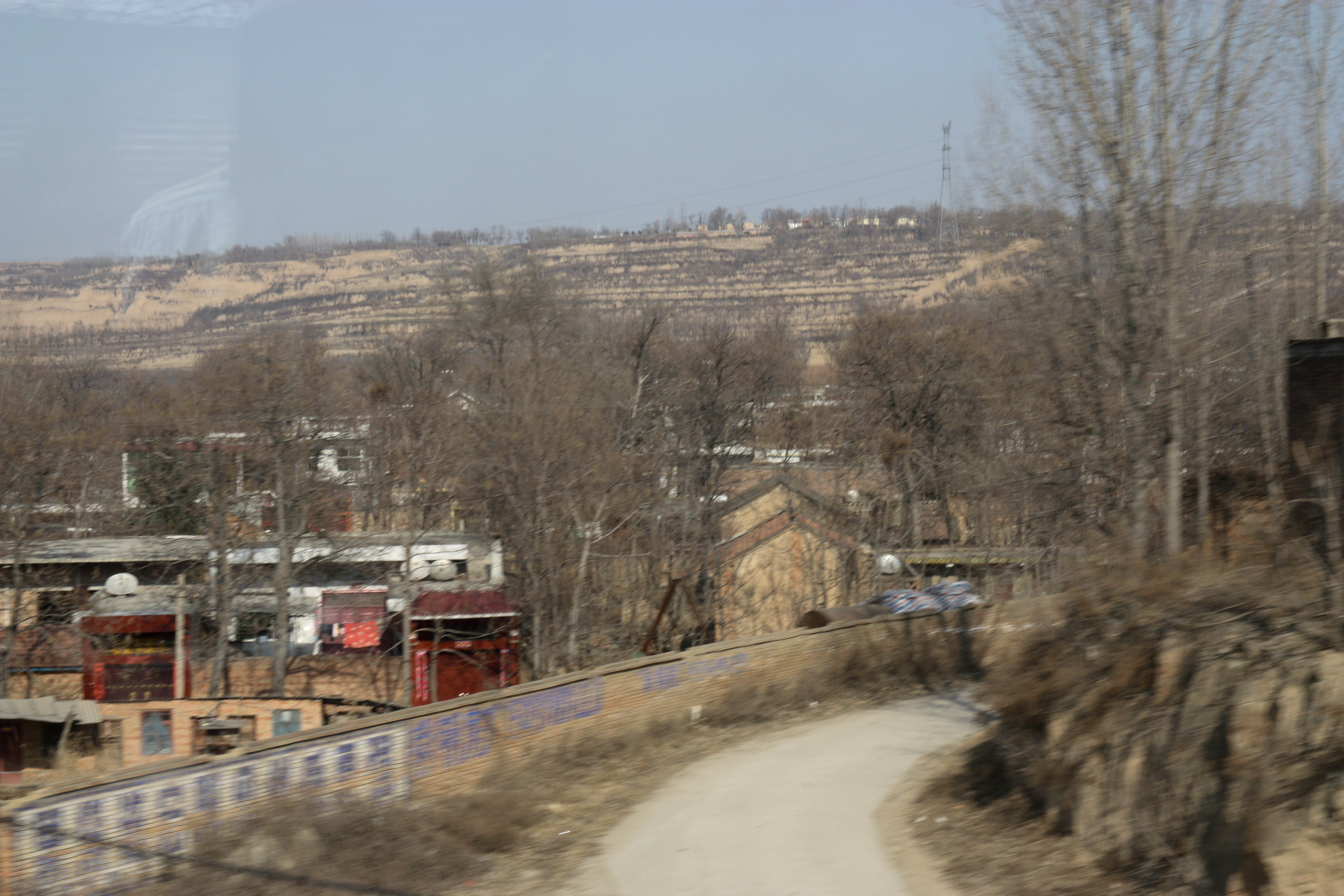 You can almost imagine the early CCP holding out in the hills after the long march.

I was thinking this repair work was a bit close to the tracks…but China can do what it wants.

My friend looking out into the dusty brown Shaanxi countryside. 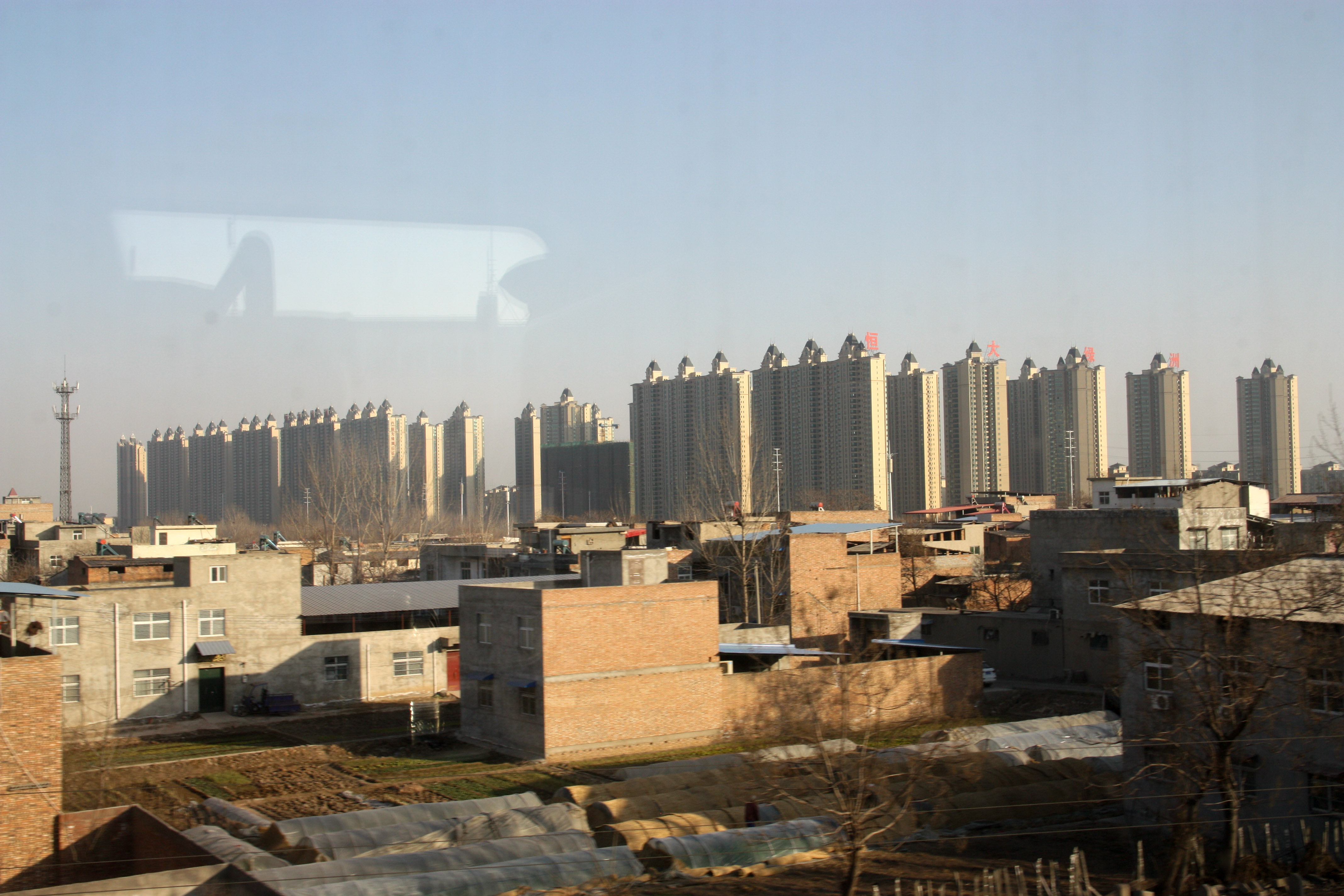 China is dotted with this kind of huge tower block development. Many never get finished, and those that do often will never have anyone live in them. 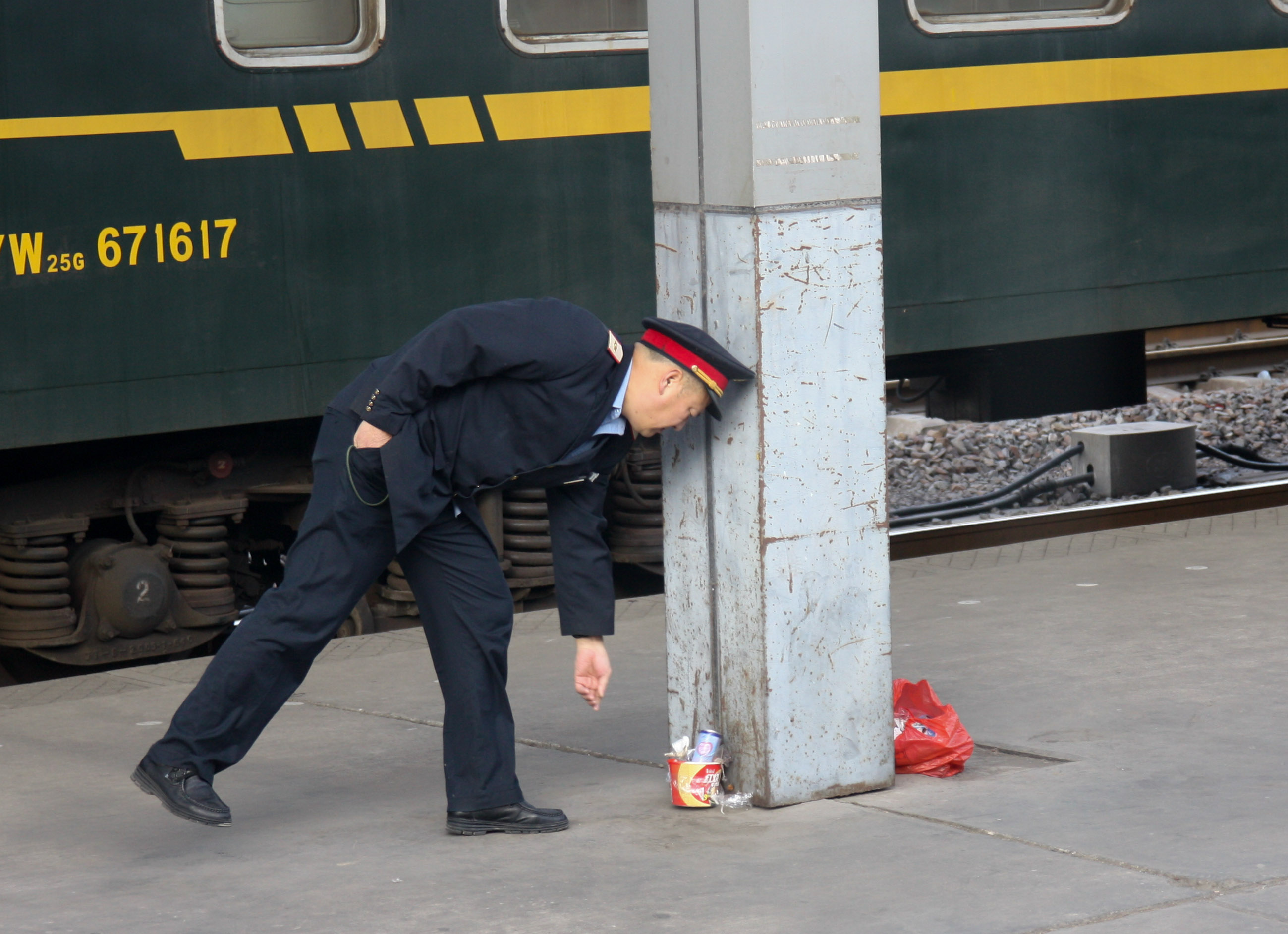 And to finish, here’s a train guard breaking his own train station’s rules and littering. Probably looks like he’s going to pick it up, but nope, he’d just placed that there.
Next stop, Changsha.