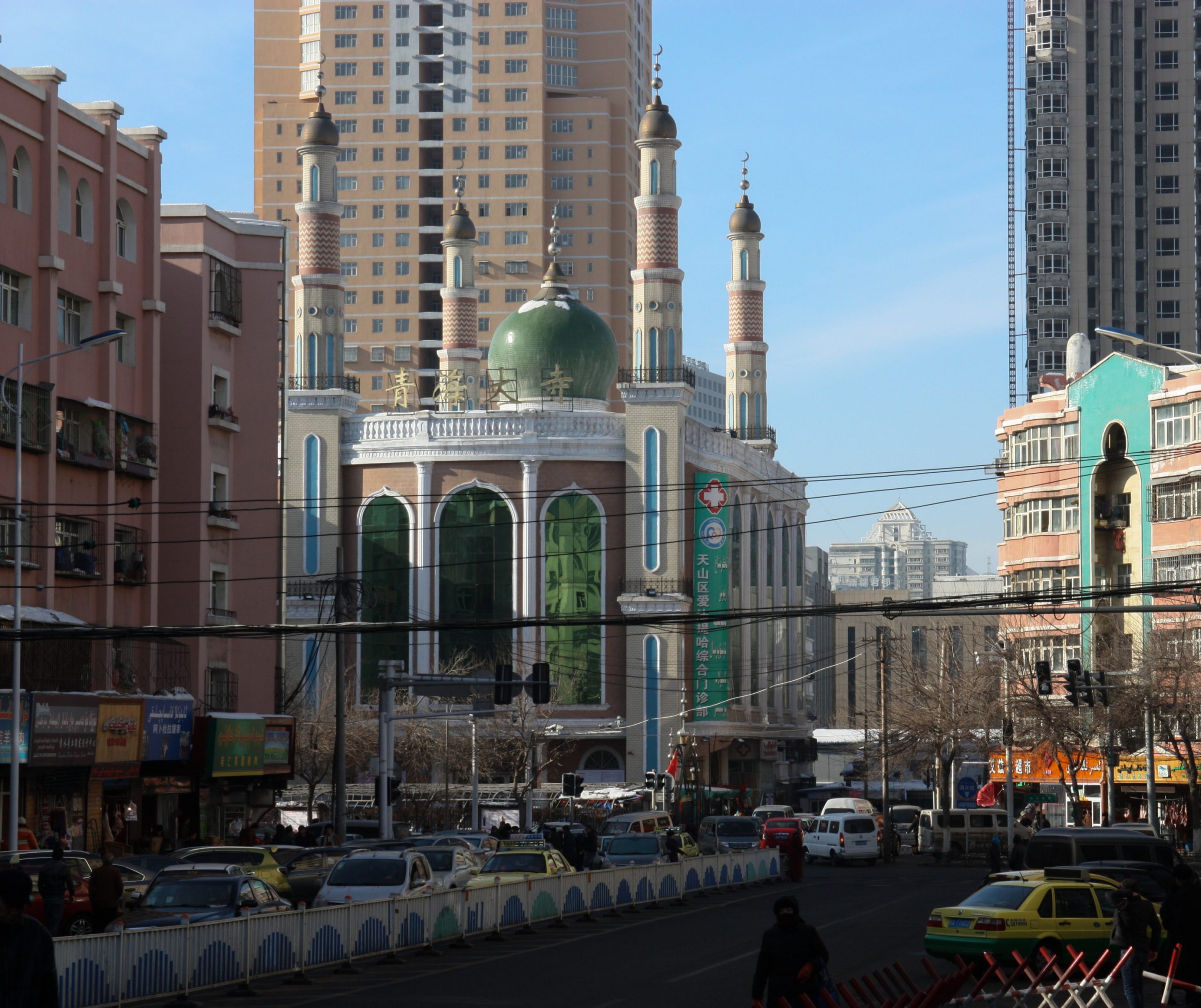 First posted on TVG in China, 2016. I’m currently archiving old posts onto one blog.
The far west of China, Xinjiang.
Scorching in the summer; Arctic in the winter; desert to the north and south; lush green grass lands between; towering mountains all around: It is an impossibly diverse place, and that’s just it’s geography.

above is what a frozen desert looks like. This trip I only saw the countryside from a train window, so I’m bit limited in photos showing the stunning scenery of the region.

As my train drew closer to the Province’s capital, Urumqi, Tianshan, the heavenly mountains came more clearly into view.
I used to have a view of this mountain range from my flat window. It was something special to see them again.
I used to live here, and my main reason for coming back was to see my old friends. Because of this, I was based in two cities the whole time and didn’t manage to get out into the region’s beautiful countryside.
The -20 degrees C temperature (warm for this time of year) also helped put off any desire to get out into the mountains.
Luckily, if not as beautiful as outside, inside the cities have plenty of interesting bits and pieces. Admittedly Urumqi is now mainly just a generic modern Chinese city, but it has it’s parts which are still unique.

That’s generic modern Urumqi. Enough of that.
The interesting side of Urumqi comes from the influence of the minority groups in the city… actually you could argue that the generic modern bits are the influence of the now majority Han Chinese, but…
…Xinjiang is one of the regions China considers and ‘autonomous region’, meaning the local government here is slightly increased powers. The predominant minority group in the province are the Uighurs, and as such, Xinjiang is the Uighur autonomous region.
These days however the majority of the city’s population are not Uighurs, but rather Han Chinese. Down on the south side of the city, there is a much stronger Uighur feel to the city.
The Uighurs are a Muslim minority (as are some of the other minority groups in the region), and because of this some characteristics of Urumqi are the large number of mosques, people in Muslim clothing and halal meat stalls.

You probably also noticed that the signs appear to in Arabic as well as Chinese.
That’s half true – Uighurs use a modified Arabic script to write the Uighur language. As well as that, I spotted a few examples where Chinese language was actually being written in Arabic script. Since seeing it, I’ve heard that some Hui people (another Chinese Muslim minority) sometimes write Chinese with Arabic script.
In fact, aside from mosques, Uighur parts of cities generally have a strong central Asian feel anyway. After a while it becomes clear that Xinjiang essentially is the easternmost part of Central asia – it is after all home to Kazakh, Uzbek and Tajik people as well as Uighurs and Han.
One of the most famous buildings in the city is the grand bazaar, and although now unfortunately just a really naff tourist trap inside, the outside building is still quite impressive. It’s also full of Central Asia feel.

Yes, someone did decide to build a carrefour in it. China…
So, aside from China putting supermarkets in old buildings, I think I mentioned the place gets pretty cold. It’s normal to go below -30 in the winter, and I’ve felt it reach 40 in the summer.
Pretty big contrast from back in the UK where if it’s below 20 degrees C people call it too cold, and above 21, too hot.
Below is what cold looks like.

Another thing which I found very interesting on this trip was something I’d missed when I lived there…and I have no idea how I missed.
There is a ridiculous amount of propaganda in Xinjiang. I won’t go into detail about what, because it’s not good for me to do so.
But what I will say is, almost every bare space at walking level had a propaganda poster – that is way more than Beijing.

A never ending wall of propaganda posters.
You might well ask what makes the minority groups of Xinjiang actually minority groups. Although the question itself is possibly a bit controversial, in short the area is very ethnically diverse. Most Uighurs clearly do not look like Han Chinese, their culture is very different, and a large number of them do not consider themselves Chinese.
There is a lot of unrest in the region due to tensions between Han Chinese and minority groups, but I think it’s best that I don’t go into detail here.
I will however share with you some pictures of the people on the south side of town.

Xinjiang food is also fantastic – it’s my favourite in the whole of China. I don’t have many pictures, mainly because I usually want to eat Xinjiang food when it’s in front of me. I do have this one of µèôÚÑ¡, or Pollo to give the Uighur name.

Traditionally eaten with your hands, pollo is considered to be the base dish of Uighur cuisine. Other local specialties include pulled noodles, naan bread and anything with lamb.
And just to finish, I said right at the start that my main reason for coming back to Xinjiang was to see my old friends. Here’s a picture of one of my best friends in Xinjiang and his family.

I miss you guys; I’ll see you again in the future.
.
.
If you’re interested in finding more information about Xinjiang, I can recommend the fantastic blog “FarwestChina”-No one shows off how stunning Xinjiang is better than there!